← My Teacher Thought This First Day of School
THE WORRY CLUB →

The Rantings of a Sick Teacher.

It’s that time of year. Everyone seems to have something – a cold, the flu, or one of those heinous viruses that take out the whole school. Have you fallen prey? I have.
Aaaacccchhhhhuuuuuuuuuuuuuuuu!

Sorry, my darlings, sorry. Aunty has a cold. Let me just get a tissue for my nose. Hang on. I’ll be right with you-
Haaaaaacccchhhhhhhhuuuuuuuuuuuuuuuuu!
So anyway, I have been down with cold for the past couple of days. My throat has been killing me. But I had to go to school anyway. The point is that teaching when ill is a bloody nightmare, I’m telling you. Ahhhh, teaching when not ill can be a bloody nightmare some of the time, so teaching when ill is a nightmare, wrapped up in a nightmare, wrapped up in a snotty tissue.
‘Scuse me.
It’s not the type of job where it’s easy to take time off. In fact, it’s sometimes easier to stick it out even if your temperature and general lethargy originates from a zombie bite because you know that by the time you go back (with an insatiable hunger for human flesh and a slight limp) there’ll be three times the amount of work to sift through.
We’ve all done it: felt the ache of sickness coming on in the early morning hours and forced ourselves out of bed and into our classrooms despite knowing that it’ll only get worse throughout the day. We alter assignments and classwork so we don’t have to talk too much through sore throats or waning voices and we push on, hoping upon hope that a sharp glance from us will be enough to keep students from straying too far off-task or fooling around too much.
I’m not good at being ill. Not only do I find it desperately unpleasant it goes against my teaching style. I’m fairly kinetic, I like to make jokes, I like to move. Being ill makes this difficult – carrying on as normal would probably lead me to getting more ill and with the term just beginning I say to hell with that.
So even though I was feeling groggy and quarter to losing my voice totally, I stayed at work and reigned in my usual style, expended a bit less effort, strove to be a bit more still, a lot more slow and made sure never to act as if I was suffering from any ailment whatsoever for fear of being thinned from the herd by the ever-present sharp-toothed predators. I became a spaceship with all non-essential systems shut down. I ran silent until my body finally decided to stop taking the huff and start to cooperate with me again. Economy of effort became key.
Why? I’m invested in what happens in my classroom, and it makes me a little sad to miss out on the implementation of a lesson I’ve worked so hard to plan. Really, I hate to cancel class because it means all the students miss it – far worse than if one of them misses! Yes, this makes me feel really bad about calling in sick, even if it’s best for my health. Like many of you, I need to get pretty run down before I’ll even think about calling in, and I’ll agonize over the decision. Unfortunately, though, the only workplaces with more germs than schools might be hospitals, and even an obsession with hand-washing, hand-sanitizing, vitamins, sleep, and never touching my face still leads to a to a serious bout of cold (cough and catarrh) about once a year. And every year I try to talk myself out of calling in sick. And every year at around the 3rd hour I wish I had. You can bet that, as you read this, I’m agonizing over whether or not I can make it through tomorrow, and I hope this sickness subsides soon so I can get back to being the enthusiastic teacher I want to be. 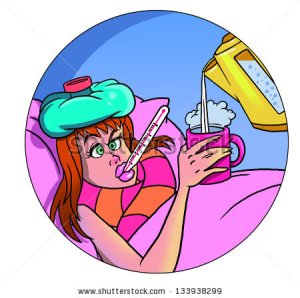 I’m better today. To be honest, it wasn’t actually as bad as all that. In fact, I learned that it’s okay to slow down sometimes. The world doesn’t end if you’re not firing on all cylinders and the things you do to get by might well be of use when you re-enter the realm of the healthy. So this year, if I have to, I will make it a point to stay home when I am sick. I think I am not as effective in the classroom when I am sick, and I end up battling whatever illness I have for even longer if I don’t rest.
Now you’ll have to excuse me, I have work to do.
Aaaaacccccchhhhhhuuuuuuuuuuuuuuuuuuu!

← My Teacher Thought This First Day of School
THE WORRY CLUB →