Who are you dating?

At first glance, it may seem that an article such as this is unnecessary – that anyone who loves God could not possibly consider spending their whole life married to someone who doesn’t! This, unfortunately, is not the case. I receive letters daily from women who are desperately trying to serve God in a full and complete way, but are unable to do so because their husband loves and serves the world. I am addressing this article to Christian women in particular, because in my counseling experience, they seem to make this mistake much more, frequently than men do. However, the problems and the principles I will be talking about can obviously be applied to any Christian thinking of marrying (or for that matter even dating) someone who doesn’t love Jesus with all of their heart.
I’m not exactly sure who came up with the term “missionary dating,” but I love it because it so appropriately paints the picture. Imagine this – a young girl, full of zeal for God, goes to a remote tribe of natives somewhere to evangelize the lost. She ends up having a special burden for the chief’s handsome young son. He seems interested in God, and so she starts spending quite a bit of time with him in hopes of winning him to the Lord. Then, before you know it, her friends at the Missionary Society receive a letter saying that she is getting married and won’t be coming back. Was he converted? Well, not really – but she has full confidence that he will be shortly. Meanwhile, she’s happily getting ready to set up housekeeping in his hut full of idols (which, of course, she wouldn’t think of worshipping), and dreaming of the wonderful future they will have together. If you heard of a situation like this, what would you think about this girl’s chances for real happiness – or her professed love for the Lord? Her actions certainly seem to contradict the very things she says she believes in. 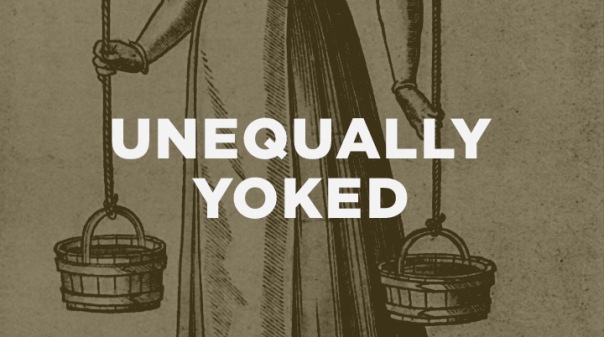 I think it’s safe to say that every marriage starts out with a simple date. Many Christians are deceived when it comes to this. They feel all right about dating an unbeliever, just as long as it doesn’t “get too serious.” They may think, “Well, one or two dates can’t hurt any one. Besides, maybe I can lead him to the Lord. I just want to have some fun right now, but when it comes to settling down, I will definitely marry a Christian.” Then lo and behold, the next thing they know they have “fallen in love,” and are desperately trying to rationalize their relationship and their upcoming marriage – to themselves, to their friends, and to God. I say this: Any Christian foolish enough to date an unbeliever is foolish enough to marry one!

I think it should be becoming increasingly clear to you that dating is not to be done lightly – nor without God’s approval! This doesn’t mean that you have to feel called to marriage with someone before you can spend any time together – but you must be able to see the qualities of a sincere lover of God in this person, and the fruit of their faith should be evident for all to see. If they pass this most crucial test, you still must seek God to see if it’s all right to take the time to get to know this person better. You should seek the Lord privately on this – that is, not with the person you are interested in. That way, if God says “No,” no one will be hurt. I am assuming you have already spent time with this person in group situations – but a deeper relationship should only be entered into if and when the Lord gives you His express permission. If you are afraid to hear a possible “No” from God, then you are not seeking His will, but your own. This should be an immediate danger signal that something is wrong, and you shouldn’t make a move until you get your heart right with the Lord.

Does all that sound a little strict to you? Well, just ask someone who has chosen the wrong mate due to a lack of patience, counsel, and prayer. They will tell you that they wish someone would have told them the same things I am now telling you. So many are bound in miserable, unhappy marriages because they ignored Jesus and let their own desires drown out the voice of God. They have learned their lesson the hard way, and now it is too late for them to turn back and start over. Marriage is for a lifetime. Once a mistake is made, you can’t turn around and say, “We got married out of God’s will, so now we’ll just get a divorce!” It doesn’t work that way. The Bible tells us that if our unbelieving mates consent to remain with us, then we must not send them away. (I Cor. 7:12-13) 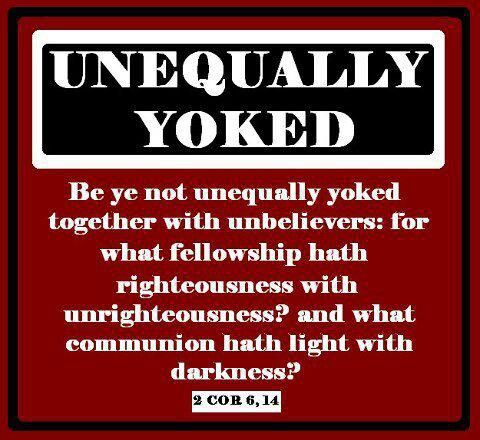 Why even put yourself in the position of possibly making the wrong decision? Since God’s Word commands us not to be “unequally yoked,” it is foolish and openly rebellious to even consider it. You will be headed towards almost certain disaster if you lean to your own understanding instead of trusting God and taking Him at His word.
Many Christian girls seem to be pacified by the fact that their unbelieving boyfriend doesn’t seem to object to their Christianity. Even though he doesn’t believe like she does, he seems extremely tolerant and even goes to church with her sometimes. He really is a very nice guy, and his biggest vice is drinking a few beers with the boys while watching football. She figures if she marries him, they will have a lot more time together, and then she can really “work on him” and get him saved. Sadly enough, she will find that it’s not as easy as she thought it would be. Eventually, her husband’s acceptance of her Bible Studies and Christian friends starts to wear thin, and the tension between them begins to take its toll on their marriage. Most girls don’t realize that if they are not strong enough to resist the temptation of marrying an unbeliever, they probably aren’t strong enough to ever win him to the Lord!
Sometimes in order to marry a Christian girl, a fellow will “make a commitment” to Jesus because he knows he has to. He’ll start going to church just to make her happy. In fact, he may even be sincerely trying to “get into it.” But if it is not a decision arising from seeing his own need for God, then it is meaningless and will be short-lived. His “commitment” usually starts to fade some time after they get married – when it’s no longer necessary for him to put his best foot forward.

I never trust a “conversion” of this type, and I consistently tell all those I counsel to let this fellow prove his commitment on his own. That is, to follow Jesus not by his girlfriend’s side, but to get to church or Bible Study on his own steam, not on a date. If he proves to be sincere, growing, and firmly planted in Jesus, then after several months, she can start to pray and seek the Lord about the possibility of entering into a deeper relationship. The problem is, most girls don’t have the patience to test the fruit. As soon as “Mr. Right” even looks like he’s about to utter a sinner’s prayer, she’s off picking out towels, dishes, and bridesmaid dresses.
Those Christians who enter into marriage with an unbeliever will never experience the fullness and richness of marriage as God intended it to be. They will never enjoy true intimacy or the blessing of a family united by the common bond of Jesus’ love. In fact, instead of experiencing that common bond (or “bonding”) of love, they will experience the “common bondage” of frustration and discontent that may lead to separation or divorce. For True Love is only possible when you know God, and when you can have His unselfish, uncompromising love for others, putting them above yourself. All else pales in comparison to the real thing. Don’t be foolish. Don’t settle for anything less than God’s very best for you. If you are called to marriage, God has a perfect partner for you. But beware, the enemy is a matchmaker too.

Trust the Lord, walk in obedience, and He will meet your needs in His way and in His timing. Lean to your own understanding and insist on your own way and watch out – you just may get what you are looking for! You may also live to regret it. Trust God. He will never lead you astray.
In closing, I want to say that if you are now in a relationship with an unbeliever, or if you have been in the past (while professing to be a Christian), I think you’d better examine your heart before the Lord. If you can find peace and contentment in a relationship with someone who doesn’t love God, then you must ask yourself how much you really love Him. After all, if you find you have more in common with those who walk in darkness… it may be because you are both walking down the same path! (I John 1:6-7; John 3:21)
Don’t deceive yourself. A sincere lover of God would never knowingly be joined to a lover of the world. Don’t even think about submitting your life in marriage to a godless partner – that is, unless it won’t bother you to live a godless life. Please pray about all that we have talked about and be quick to respond to the things God has spoken to your heart. I love you very much, and I pray that you will reach the highest potential possible in Christ Jesus as you obey Him in all things. May God bless you as you seek Him.